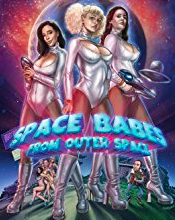 Three alien 'space babes' crash on earth and need the power of love and erections to escape. They are hunted by their enemies, de-evolved males called the Scrotes, but learn to 'embrace' the male species again in this funny, sexy, sci-fi romp that is an ode to both sexploitation and sci-fi serials from the late fifties and early sixties.
Co-producer, DOP and 2019 festival guest Scott Schirmer will be present to introduce the screening!