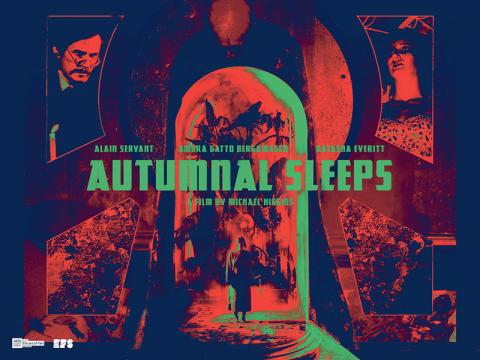 In a remote rural estate house, a woman sleeps, she is alone. It’s a time not far from the dawn of the moving image, the obsessed and wealthy Dr. Epstein engineers a number of scientific experiments. He subjects his adopted children, Pete and Re-Pete, along with his darling flapper, Baby Dee, to his various scientific tasks. Things take a decidedly strange turn when Epstein makes a deal with some shifty-looking vagabonds. On doing so he opens a door to the unknown, ruptures the fabric of time and unleashes a shadow-like character bent on reducing all those he encounters to dust. Photographed on expired 35mm film with a 50year old Soviet camera, Autumnal Sleeps takes inspiration from early silent cinema. The characters and the nature of performance resemble those from a roadshow attraction while highlighting the illusory power of voyeurism and exhibitionism. Like unrestored film of early cinema, the image flickers and the colours bleed creating a psychedelic sensation as one transported through a haunting industrial score broken up with poetic interludes that examine the deeper emotions of the characters. Supported by The Arts Council of Ireland and Experimental Film Society.